Back to Part 4
NORTHERN THAILAND

The northern part of Thailand is quite different from the center. First of all, it LOOKS different: it is very mountainous rather than flat, with many powerful rivers and dense forests. It feels different, too, with the higher latitude and the mountains contributing to cooler temperatures and a generally more comfortable climate. And, it even sounds different: while most people can speak central Thai, they prefer to speak the northern Thai dialect, which is quite different. And the hill tribes who live out in the mountains speak completely different languages of their own, not to mention living very different lives from the Tai majority. The second largest city in the country, Chiang Mai, is here; it is a major arts and crafts center where you can find beautiful painted umbrellas and products made of silver, silk, lacquer and teak. In the southern part of the region, the earliest and perhaps greatest center in Thai history is located: Sukhothai. Check it out! 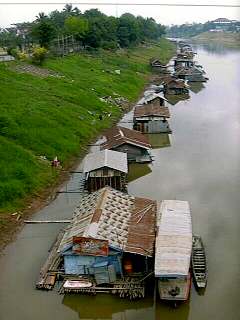 Coming from the south, the first big city you reach in the north is Phitsanoulok. As in Damnoen Saduak, much of the life there centers around the river; some people even live on it, as do these people in their houseboats. 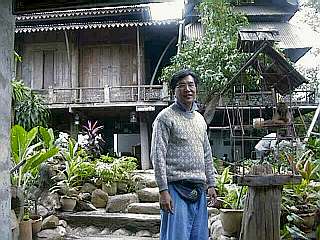 When I got into Phitsanoulok, I checked in at the International Youth Hostel. This is a special IYH run by this man, Sapachai, who quit his high-tech job in Bangkok to come back to his boyhood home and start this hostel. He took teak wood that was being thrown away from old houses to build the hostel. Teak is a very beautiful wood; it also resists mildewing and being eaten by insects, and there are buildings built of it that are a thousand years old. Because of these characteristics it is highly valued, and whole teak forests have been logged. At this point, less than ten percent of the original teak forests of Thailand remain, to the disadvantage of all the other wildlife that lived in those forests, too. While there are laws protecting the forests that are left, the logging continues. 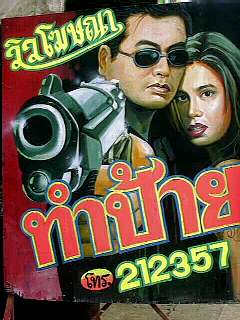 Walking into the center of town, I came upon this movie poster. Like in most places I've been in this part of the world, the most popular movies are the action, shoot-'em-up kind. This is obviously no exception. You can also see Thai writing, which is nothing like the Roman system we use to write English, Spanish, etc. 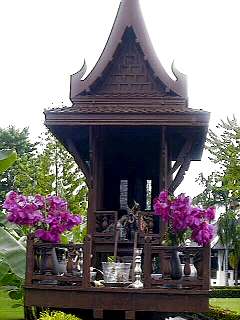 The main reason I came to Phitsanoulok, though, was to visit the famous Buddha-making foundry of Sergeant Major Thawi. Outside the foundry was this spirit house. Virtually every house and business has a spirit house like this, installed with the help of a Brahmin (high-caste Hindu), designed to shelter the spirits of the site so they don't enter your own house and cause mischief. This is an example of the animist beliefs the Thais join together with their Buddhist ones. These animist beliefs have their origins in the distant past, when the Thai people came from China and Vietnam and worshipped the variety of spirits they believed live in every living thing (animals AND plants) and even non-living things like rocks, the air and the sun. It is also an example of the syncretism that is a part of Thai culture, where very different ideas or practices can be joined together in daily life -- here, those related to Buddhism, animism AND Hinduism. 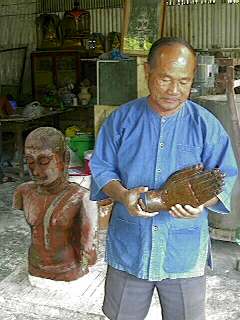 Dr. Thawi's forge is famous because of his insistence on using the ancient, traditional "lost-wax" method of making Buddhas. He focuses entirely on making small-scale copies of the Chinnarat Buddha, which is located in Phitsanoulok and is one of the most famous of all Buddha images in the world. Dr. Thawi is very involved in the work of his twenty or so employees; here, he is carefully looking over some of their work. 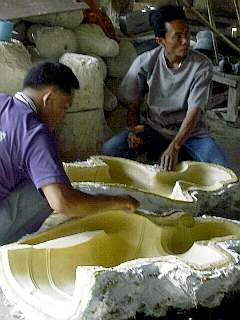 In the lost wax method, a model of the Buddha to be eventually made out of bronze is first sculpted out of clay and sand. The model is covered in plaster to make a mold; then, as you see here, the inside of the mold (which is in two parts) is painted with layer after layer of wax. Once the wax has solidified, the two halves are joined together and more plaster is poured INSIDE, between the two halves. The result at this stage is a thin wax image of the Buddha sandwiched in plaster. The next step... ...is to remove the plaster, leaving the wax image alone. This one is HUGE, but still not as big as the original. Next, the wax image is smoothed out, as this sculptor is doing, to remove any imperfections. Once this is done... 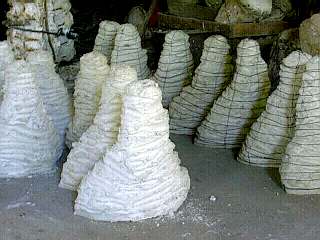 ...the wax image is once again sandwiched in plaster. This time, the whole package is tightly wrapped in wire, and holes are drilled into the bottom of the plaster. Then... 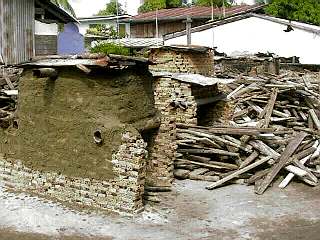 ...the wired molds are put into a wood-fired kilns like these. The wax melts and pours out of the holes in the plaster coating, leaving a plaster mold with the thin-skinned Buddha image left inside where the wax used to be. In the final step of the molding process, molten bronze is then poured into the mold, and when it is cooled the plaster is cracked off to reveal the finished Buddha -- in bronze! Of course, there's still polishing, sand papering, painting and even gilding (plating with gold leaf) work to be done, but the basic sculpture is there. 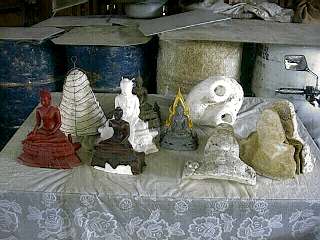 The big advantage of this method, according to Dr. Thawi, is its faithfulness to the original way of making the Buddha. The results are beautiful, with the whole cast image being of one piece rather than joined-together parts, as with other approaches. This picture shows all the stages of the lost-wax casting approach. In the center is a final product, which is a replica of the original Chinnarat Buddha. 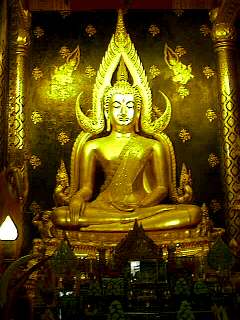 And, here is the original Chinnarat Buddha! What makes it special is the flaming halo around its head; at the bottom, it the flame turns into dragon-serpent heads. The style is also from the elegant Sukhothai tradition -- which is the next place I visited. 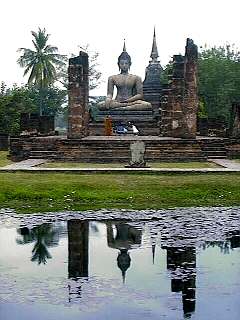 Sukhothai is considered the "cradle" of Thai civilization. In the twelfth and thirteenth centuries, it was indeed the largest and most powerful of all the Tai kingdoms. Evidence suggests that the Tai people are originally from an area called Sipsongpanna (Xishuangbanna in Chinese), which extends from the city of Kunming in southern China's Yunnan province to the south and east into northern Vietnam; they migrated into northern Thailand and lived under the rule of the Khmer, who were centered in the area that is now Cambodia, until defeating them in battle in the 13th century.

Sukhothai was a spectacular city at its height. (To read about what it was like, see box below.) The people of Sukhothai adopted the Buddhist traditions of the people they encountered when they first came to the area, called the Mon, then built glorious monuments to their beliefs that stand to this day. The Buddha figures at Sukhothai are widely thought to be among the most beautiful in the world. 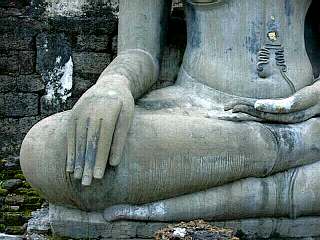 What characterizes the Buddha sculptures at Sukhothai is their "boneless" look, so that finger, elbow, hand and leg joints appear to be completely supple. This is meant to express the state of "nibbana" (or nirvana) the Buddha achieved... 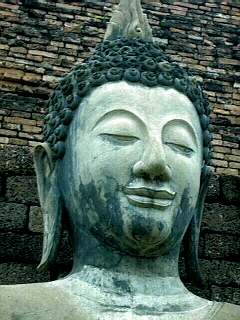 ...a state of "non-being". His lack of physical tension on achieving enlightenment is evident in the face of this particular sculpture. People come from all over the world to see these wonderful sculptures; the sense of peace throughout the city is really incredible.

Copyright © 1999 by Avi Black
This page is maintained by Todd Greenspan for Avi Black
Comments and suggestions welcome.
Last updated
3/25/99